WCPL will be closed February 20.

For fans of A Man Called Ove, a luminous debut novel about a widows unlikely friendship with a giant Pacific octopus reluctantly residing at the local aquarium-and the truths she finally uncovers about her sons disappearance 30 years ago 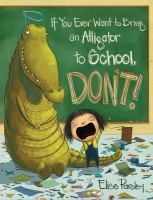 If you ever want to bring an alligator to school, don't!

Note to self: If your teacher tells you to bring something from nature for show-and-tell, she does not want you to bring an alligator! But nothing will stop Magnolia, who's determined to have the best show-and-tell of all--until her reptilian rapscallion starts getting her into some major trouble. Now it's up to Magnolia to find a way to send this troublemaker home--but what could possibly scare an alligator away?

Princess in the Spotlight

Just when Mia thought she had the whole Princess thing under control ...
Things get out of hand, fast:

Since Mia's the brand-new crown princess of Genovia, indomitable dowager princess Grandmère arranges a national primetime interview for her. With just a few innocent remarks, Mia manages to enrage her best friend Lilly, practically get one of her teachers fired, and alienate the entire country of Genovia. (Population 50,000, but still!)

There's the havoc of the interview's aftermath and her dreaded princess lessons at the Plaza. Plus an unexpected announcement from her mother, and intriguing, exasperating letters from a secret admirer. Mia is swept up in a whirlwind of royal intrigue the likes of which hasn't been seen since volume I of The Princess Diaries.

What's an heir to the royal throne to do?

Our new mobile app is now available in your app store or scan the QR code below.  Access your library account or search for books and more on the redesigned app.